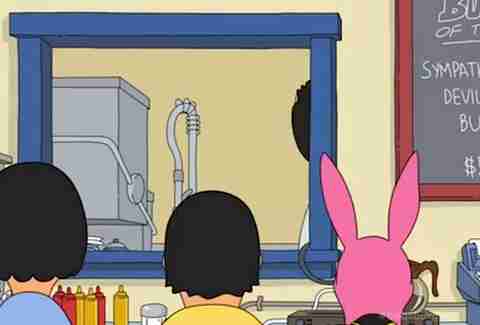 I’d be lying if I said I know where the month of June went. I have vague recollections of a few things. My dogs both had dental work done. My husband went on his annual two-week writing retreat. Nobody died, and at some point I must have done laundry. Other than that, your guess is really as good as mine as to what happened during that 30 day span of my life.

I know some things that didn’t happen. For instance, I did not do a scintillating write-up of this burger I made on May 30th, the latest in my 2018 goal of making it through as much of The Bob’s Burgers Burger Book as possible. I didn’t enthrall you with a post about the burger I made on March 30th, either. But one thing at a time. That one is already solidly in the realm of really truly madly deeply super late, and another week or two won’t matter. This one can still qualify to a generous soul as only moderately tardy.

It is July 5th as I write this, and I will do my best to recollect what happened on that fateful day back in May. I remember wanting to grill because it was hot outside. I remember it was a Wednesday, the night before grocery & Imperfect delivery day, which meant clearing out the fridge and finishing up produce from the previous week. There were three eggs left in the carton, too few to last a week but fitting two cartons in the Designated Egg Carton Fridge Space is tricky at best, so I perused the book to find something that used eggs, and found the Sympathy for the Deviled Egg burger.

And I remember having “Runnin’ with the Devil” stuck in my head for the rest of the day, and no amount of telling my brain to quit being stupid because that’s not even the same band would make it go away.

There was a darkness in the house that evening. A dimming beyond the gradual set of early summer sun, a sense of fading, color rent by unseen hands, loosing from what had been and wafting directionless, leaving only blackness behind.

Which is a superpoetic way of saying “I burned the fucking burger buns. Twice.”

The second ones were edible, just. I made that determination based more on steadfast refusal to toast a third set than anything else. Everybody’s taking charcoal supplements these days anyway. I was just cutting out the middleman and saving a few bucks. 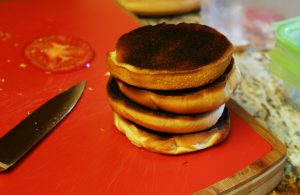 Without color, things seemed also without shape, size, perspective. Clean lines became jagged edges, what once fit neatly in the palm of my hand now refused to cradle there, instead shaking itself to pieces and falling between my helpless fingers as I watched, disbelieving.

(“I had every intention of making chips until I didn’t notice I had the wrong fucking blade on the mandolin and julienned the potatoes instead.”) 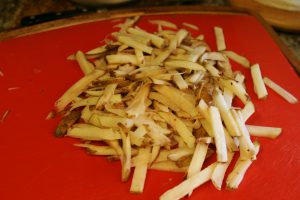 And in that place I was lost, but from that place was only one path, narrow, shadowed, and however uncertain the ground beneath might seem there was only forward along that path. Others’ words could serve as guide, as warning, their hard-won triumphs tales on which I could warm my hands, but at the end as at the beginning, whatever I might do, it was on my shoulders alone that both glory and blame would fall.

(“I’m going to grab a bunch of shit from the fridge and stick sorta close to the recipe until I feel like not doing that anymore.”) 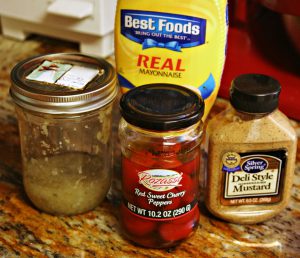 The original recipe is a pretty straightforward thing, a burger topped with egg salad and lettuce. Their egg salad called for 7 eggs to make 4 burgers. As previously mentioned, I had 3 eggs, but I was also only making 2 burgers so the math mathed properly. 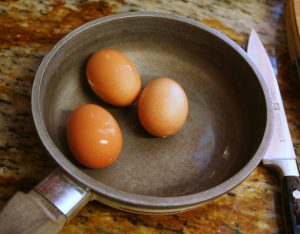 Their egg salad recipe called for juice from a jar of sweet pickles. But they obviously don’t have sisters as cool as mine because one of the things I needed to clear out of the fridge was the last precious bit of homemade pickle relish one of my beloved sibs had gifted us the previous Christmas. Homemade from cucumbers she grew. 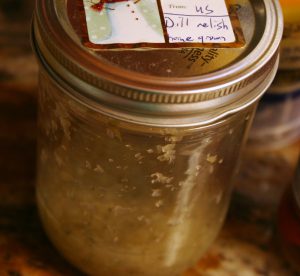 And while I was clearing things from the fridge door, I grabbed the last few peppers from the jar I opened for this burger. 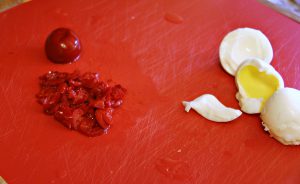 Between the additional liquid from the larger quantity of picklage, and the oil from the cherry peppers, I didn’t need much mayo and mustard to make an egg salad of spreadable consistency. But I used too much anyway. 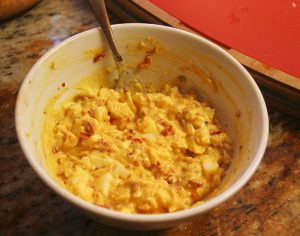 Which proved a blessing in disguise because, in addition to burning two sets of buns, I managed to overcook the patties, and the extra moisture in the salad was desperately needed to make this burger work. Adding slices of the tomatoes I needed to use up also helped. 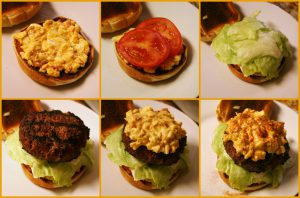 Preheat oven to 425°F. Accidentally julienne two Russet potatoes and spread them on a baking sheet. Sprinkle with about 1/2 tsp of salt (more or less if you like your potatoes more/less salty), and generous drizzles of olive oil and Sriracha. Toss to coat evenly and bake until crisp, stirring after the first 10 minutes, 18-20 minutes total. 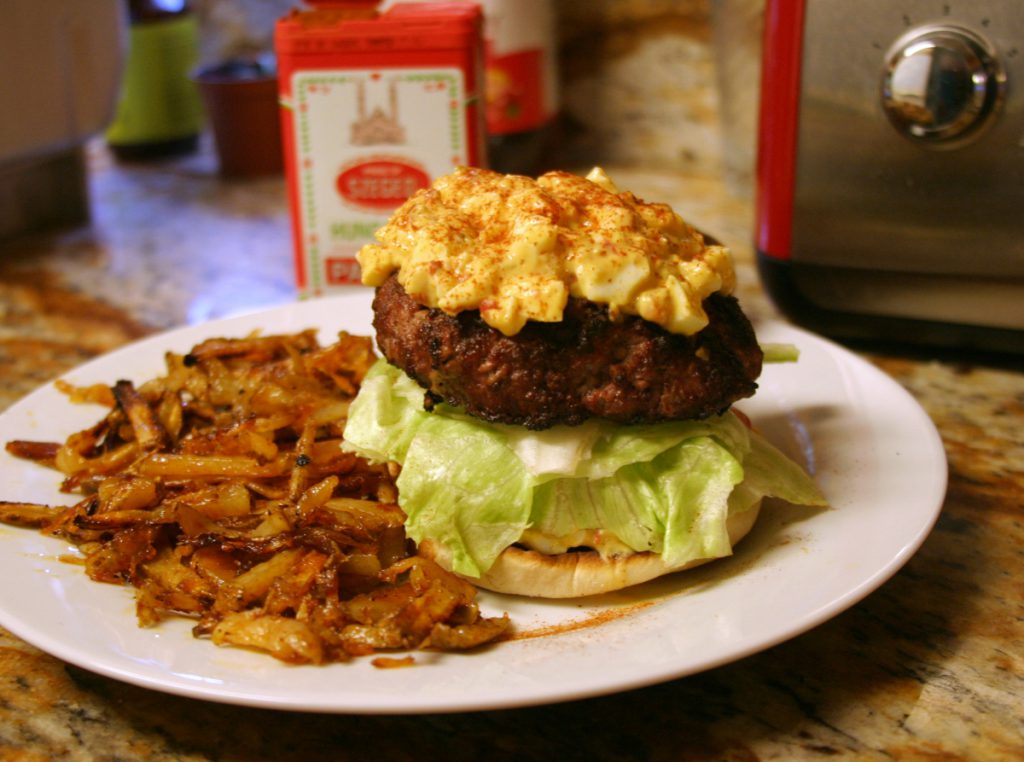 I awoke the next day with a sense of otherness, a lack of presence within my own flesh. I had been somewhere, met someone, become someone. Actions in my name, their proof before my eyes, I could recall only as threads trailing from the hem of a borrowed gown, its edges frayed as it dragged along the ground, pulled and pulling, by the unseen and toward the unknown…

(“Yeah, I actually burned the fucking burger buns. Twice. Or did I…?”)

Those 2 brioche buns you burned because apparently you can’t be trusted with a toaster
2 eggs now that you’re back from the grocery store and have eggs again
1/2 cup milk
1 packet Starbucks Via because if you add coffee to a thing people will assume the bitterness is coffee and not burnt burger buns
1 tsp vanilla
dash of salt
12 Hershey Kisses, coarsely chopped, to mask some of the bitterness of the coffee
1 tbsp brown sugar

Preheat oven to 350°F. In a small bowl, whisk together eggs, milk, Via packet, vanilla, and salt until thoroughly combined. Tear inexplicably-burnt buns into roughly 2″ pieces and place in a small baking dish. Sprinkle chopped chocolate evenly over bread, repeat with brown sugar, then pour custard over the top. Press down so all the bread is saturated. 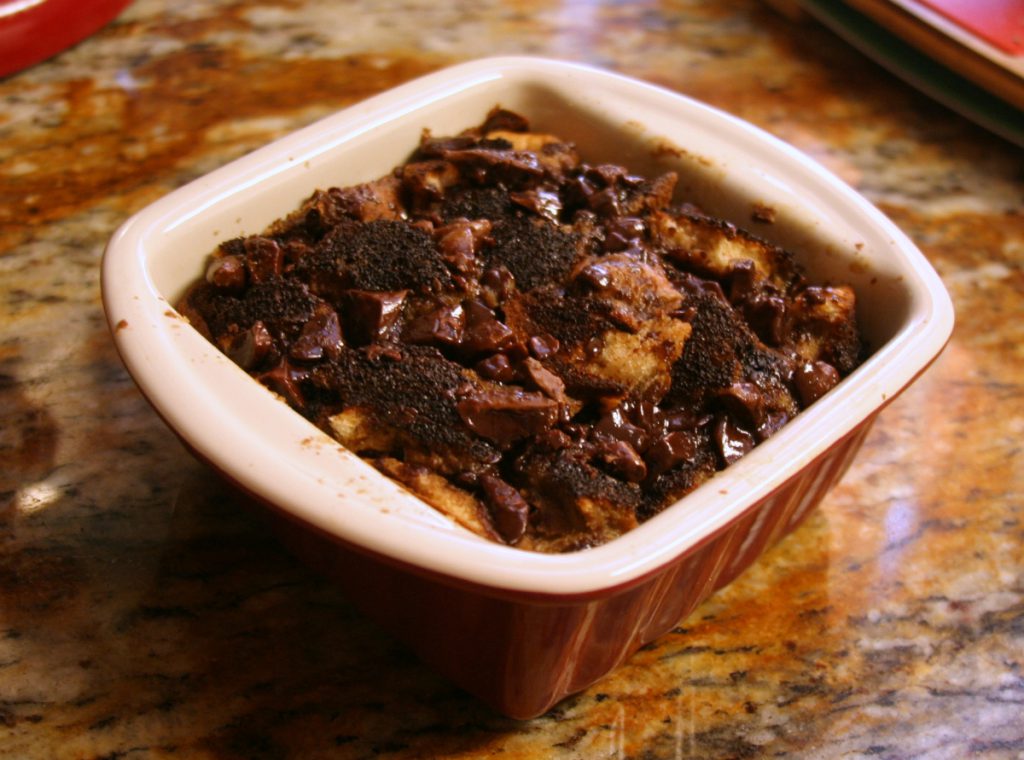