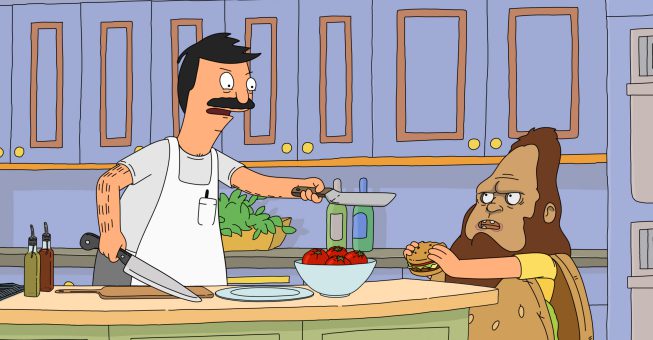 The other night, I wanted a burger for dinner. A big, sloppy, extra-napkins-at-the-ready kind of burger. And a turkey burger because I had a Costco four-pack of ground turkey taking up half my freezer. It was a cardio day for me, and a bike-to-work day for The Guy, so I knew a large evening meal would be welcome. And in 2018, burgers for dinner means a Bob’s Burgers Night. Among the produce that needed to be consumed before the next Imperfect delivery were a yellow onion and a bunch of green onions, so I grabbed my handy Bob’s Burgers Burger Book to see what I could find.

What I found was a recipe for a burger called Onion-tended Consequences. Which sounded delicious, but also required a bunch of things I didn’t have around. So I decided to make a tribute burger. 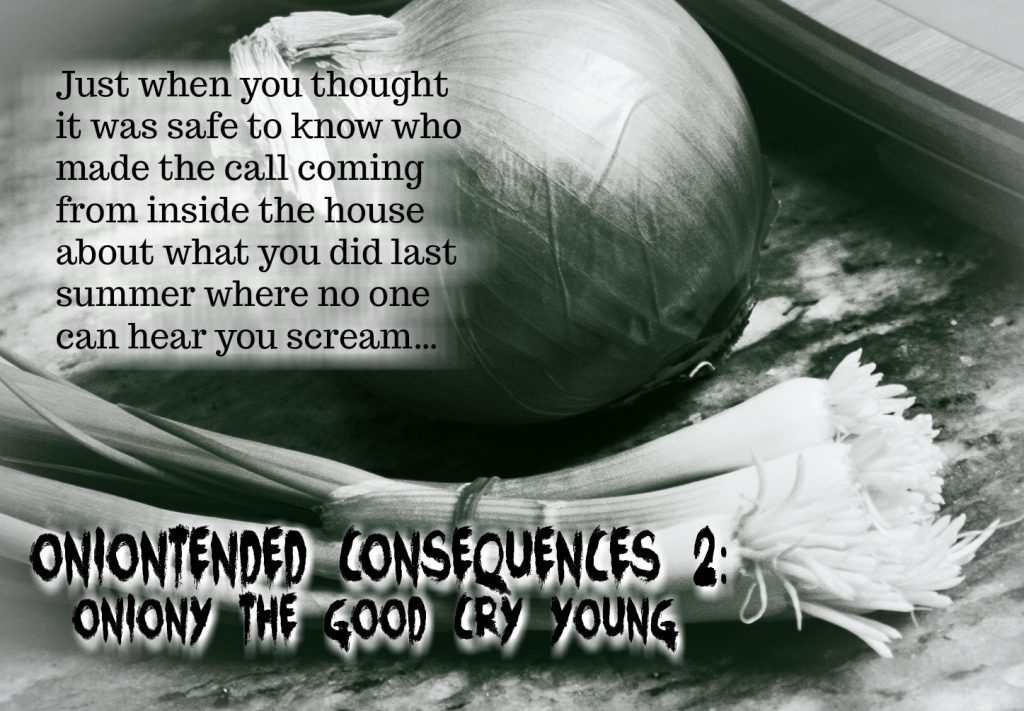 Like many sequels, it managed to include one member of the original cast but otherwise resembled the original in name only.

The original is a beef patty spiced with Italian seasoning, topped with chèvre, caramelized onions, and spring greens, served on an onion roll. Which I absolutely would have made if I’d had chèvre, spring greens, and onion rolls handy. And if I’d wanted a beef patty. And if I didn’t need to use up a bunch of green onions. I was so close.

3/4(ish) lb ground turkey (I thawed a pound and used about 3/4 of it to make 2 large patties)
a bunch of green onions
salt & pepper
half a yellow onion
a glug of olive oil
the leaf lettuce that also needs to be used up before the next Imperfect delivery
as much pepper jack cheese as you feel like eating
that jar of cherry peppers you picked up last time you were at Big Lots
1 tbsp each mayonnaise & spicy brown mustard
2 brioche buns, toasted

About 3 days before you think you might feel like eating, cut the onion into thin slices, put it in a sauté pan with the glug of olive oil, put it over low heat and join me in never not being sad about how long it takes to caramelize a damn onion SERIOUSLY WHAT IS THAT EVEN SUPPOSED TO MEAN AND WHY DOES IT TAKE SO LONG 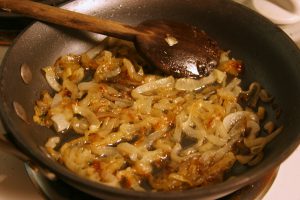 so yeah, about 30 minutes, but the good news is you can start that and have plennnnty of time to do everything else in the meanwhile.

With whatever little strength may be left in your arms, chop the bunch of green onions as small as possible. Add them, along with salt & pepper to your liking (I used about 1 tsp of salt and 1/2 tsp of pepper) to the ground turkey, and mix gently until just combined. 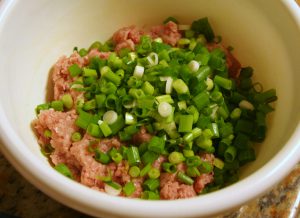 Suspect you may have used too much green onion. Accept whatever consequences for this action the future may hold, and press onward. And by “press onward” I mean “separate meat mixture into equal parts and form 2 patties, heat a couple of tablespoons of canola oil in a frying pan over medium-high heat, and cook the patties until they are browned on the outside and reach an internal temp of 165°F”.

When the patties are close to done, and you realize you have not in fact used too much green onion because they’re holding together beautifully, top them with as much pepper jack cheese as your cheesy little heart desires so it has time to get nice and melty. I used 2 slices for each patty. I will not judge you for using more. 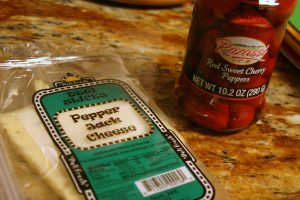 Remove the patties from the pan and let them rest on a plate while you prep the rest of the stuff. Toast your buns (…baby). Wash & dry your lettuce. Fish your peppers out of the jar and start to chop them before you realize they’re squishy and all you really need to do is press them flat.

I always worry about turkey burgers being dry, so I wanted some kind of dressing on the bun. Straight mayo seemed like it would be too heavy with all that cheese, and I’m not a huge mustard fan but mustard appeared to be the right tool for the job. So I used half & half. It was perfect. 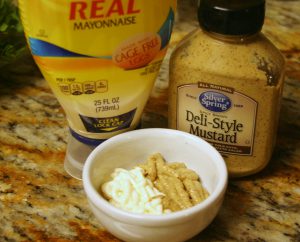 I used my fought-for-and-hard-won perfectly cut potatoes to make baked fries because they’re less greasy than fried fries. Spread potatoes on a sheet pan, sprinkle with salt, drizzle with about a tablespoon of olive oil, and bake at 425°F until browned, about 15-20 minutes.

The other side was a broccoli citrus salad leftover from the night before, which is really simple but one of the most delicious broccoli sides I’ve ever made so I’m going to write it down here for both of our sakes so you can make it too and I can remember how I made it. For years, I thought I didn’t like broccoli stems. Turns out, if they’re sliced thin enough and hit with a nice acidic dressing, I love broccoli stems.

Whisk all ingredients except broccoli in a bowl with a cover. Taste dressing and adjust salt as needed. Add broccoli, stir to coat evenly, let sit for a couple of minutes and taste again. Add more salt if needed, cover & chill for about 30 minutes before serving. 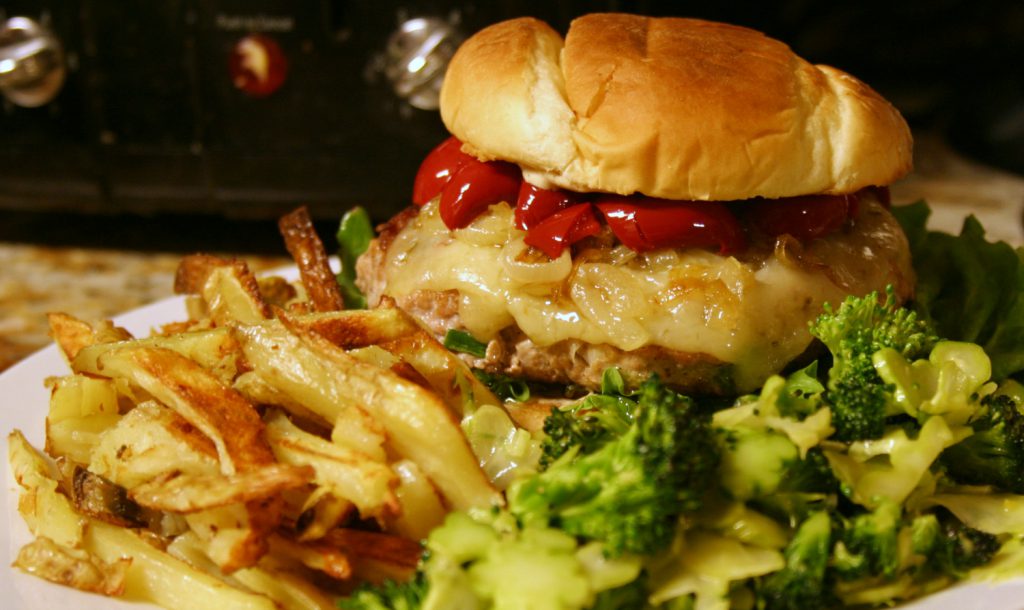 This was one of the best turkey burgers I’ve ever had. My arms were sore for 3 days after making those fries. I love broccoli stems.


see all the Bob’s Burgers posts
return to The Blog