If Looks Could Kale

When I set my 2018 goal of working through as much of The Bob’s Burgers Burger Book as I possibly could, I went in knowing not every burger I made would be beef. We have a tradition in this house called Round Thing On A Bun Nights, and by “tradition” I mean “open acknowledgement that there will be nights I am too tired/busy/not-at-all-in-the-mood to cook”. So in the freezer are kept brioche buns that can be simultaneously thawed & toasted in about 4 minutes, and a selection of pre-formed patties of various proteins, meat-based and otherwise, that can go from freezer to pan to table in the time it takes to prep the toppings and thaw & toast the buns. Cheaper, easier, and less terrible for us than ordering pizza, with the added advantage of not requiring the putting on of pants to open the door for the delivery person.

Which brings us to yesterday. Round Thing On A Bun Nights very often follow Photo Shoot Days, which yesterday was. But it was also Meatless Monday, which I try to be at least a little creative with so that we don’t end up eating tofu & veg curry over rice every. frikkin. Monday. One of our Round Thing options is Don Lee Farms vegan patties, which frankly look and sound a lot like they were made from whatever was in the dustpan after they got through sweeping up Hippie Fest, but which also have a certain charm that cannot be denied when paired with the right flavors. 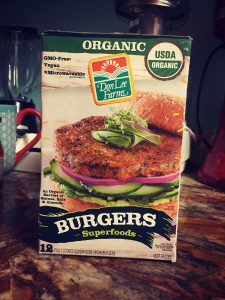 One of the things in the patties is kale. I had a bunch of kale in the fridge that was getting on a bit and needed to be consumed post haste. The opportunities for both Kaleception and a rare Bob’s Burgers/Meatless Monday crossover episode were too great to pass up. Thus, my take on the If Looks Could Kale burger was born.

In TBBBB, this recipe is a beef burger on a whole wheat bun, topped with gruyere and roasted kale, and served with a tomato & rosemary orzo salad. As previously stated, I used vegan hippie patties in place of beef, and my standby brioche buns. I had the called-for grated gruyere in my freezer because I keep it on hand for fondue emergencies. I had frisée which I decided to throw on because when Imperfect said they were including it in last week’s box I didn’t realize they meant roughly two city blocks worth of frisée and I’ve stopped just short of putting it on my cornflakes to make sure I finish it before it goes bad. I had the kale. And I had the garlic the recipe asked for but, after reading the recipe 7 times, no idea what to do with it.

You missed a step. NOWHERE IN THIS RECIPE IS IT SPECIFIED WHAT ONE SHOULD DO WITH FOUR CLOVES OF MINCED GARLIC.

Fortunately, the archives on The Bob’s Burgers Experiment are still accessible. And there, intrepid readers, we learn that this burger is meant to be topped with garlic-roasted kale. So if you’re following the recipe in the book, add the garlic to the kale when you add the olive oil. 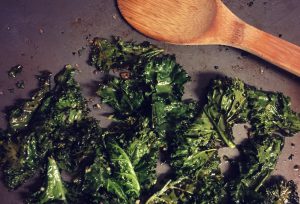 Since the fat content of vegan hippie patties is drastically different than that of beef, this burger needed more moisture from somewhere. Thankfully, when you are the sort who buys esoteric closeout foodstuffs the way others buy new handbags, you will likely have the appropriate something on hand for occasions such as these. 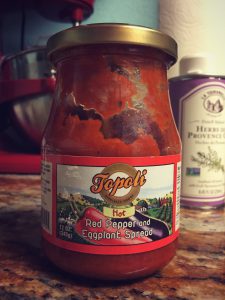 You will unlikely have this exact thing, but any spicy relish will work. Good old pickle relish with a shot of hot sauce will do. These patties are good, but they really need something to compensate for their relative dryness, and a bit of heat to balance their somewhat sweet nuttiness.

I didn’t have orzo in the house. Pretty sure the last time I had orzo in the house was around 2003. It’s just not something I keep around. I did have brown rice, and I did have tomatoes. I could have had fresh rosemary if it hadn’t been Negative Butt Freeze Celsius outside and I’d wanted to go get some from the garden. You may have gathered from my phrasing that I did not avail myself of that option. Once again, it was Random Esoteric Closeout Foodstuff Purchase to the rescue. 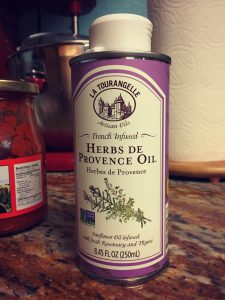 I decided to throw in zucchini as well, for extra veg cred. 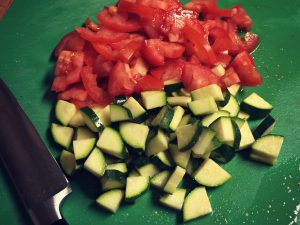 So for my “salad” I cooked half a cup of brown rice well-salted until it was just shy of done, took the pan off the heat and stirred in one small zucchini and two Roma tomatoes, chopped smallish and also salted, along with about a 2 tablespoons of the flavored oil, covered the pan and put it back on the heat for about a minute, then turned the heat off and let it sit while I fixed the burgers. The result was the veggies being heated through but still firm, and the rice absorbing some of the water from the veggies without being overcooked and mushy.

All in all, it was a pretty successful crossover episode.