On Thursday mornings, my mom and I go shopping together, first to Grocery Outlet and then to Costco. Aside from the practical advantages of one fewer car on the road and me not having to buy my own Costco membership, it’s a chance for us to spend a couple of hours together hanging out, catching up, bitching whatever bitchery may be needed as a result of the past week’s events, and reaffirming our mutual belief that very few people in California know how to drive like not completely oblivious fucking morons.

My mom is awesome.

An offshoot of this regularly-scheduled shopping trip is that Wednesdays have become “clear out the fridge” days, compounded by the most recent addition to my provision-procuring routine, a weekly delivery from Imperfect Produce which arrives on Thursday nights. Further compounding the clearing out need this week is the fact that my garage freezer is dying and its replacement will be here in 5 days, so I want as much out of the old freezer as possible before then.

I had a bowl of leftover Super Bowl hummus in the refrigerator. Because while I have virtually no interest whatsoever in football, I am all about days where it’s not only acceptable but expected to eat snacks for dinner. By the time we plowed through the parsley pesto & goat cheese pinwheels topped with smoked salmon, there was no way we were finishing all the hummus. 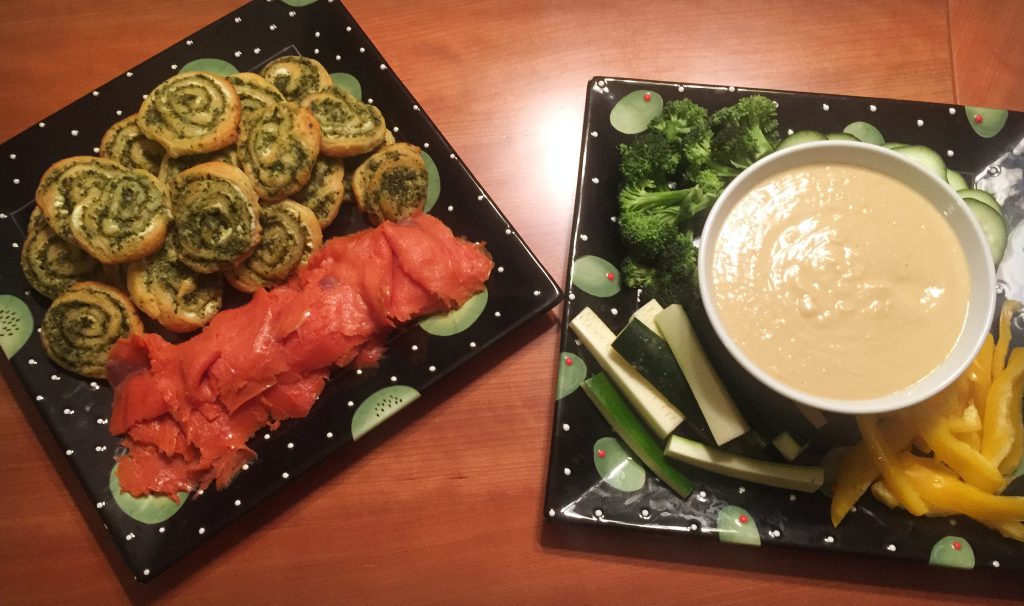 I also had a packet of ground lamb in the freezer.

And it had been about two weeks since my last Bob’s Burgers adventure. Hence my take on the Hummus A Tune burger.

The original recipe in The Bob’s Burgers Burger Book calls for ground beef patties with the option of using a ground beef and lamb mix. I took that option a step further and used all lamb. I cannot recommend this option strongly enough. This option is amazing. It’s not even really an option. The power of lamb compels you.

SUPER IMPORTANT: Another way the power of lamb compels you is to not overcook it. You can sometimes get away with a well-done beef patty. You can never get away with a well-done lamb patty. It will just be angry and rubbery and sad. I cooked mine in a cast iron skillet over medium-high heat just until the juices ran clear, about 5 minutes on each side for 1/2 pound patties (don’t judge, I have a freezer to clear out) and they were perfect. I also went a little heavier with the black pepper than I usually do with beef, but that’s entirely up to your feelings about lamb and black pepper. My feelings on that subject are quite strong.

The other point at which my interpretation of this burger veered away from the original was on the subject of peppers. The recipe called for roasting two large red peppers. I did not have two large red peppers. I had one large orange pepper left from the previous week’s produce shopping. I also had one small red pepper and four tiny orange peppers because February in California and why wouldn’t my garden decide to do that right now from last summer’s plants? So that’s what I roasted.

The recipe in the book details the hummus, which I already had, so from there it was a pretty straightforward assembly: toasted brioche bun spread with hummus, romaine lettuce, patty, peppers, and more hummus on the top bun because I really need this hummus out of my fridge.

Also needing to be cleared out of the fridge on this Wednesday was a bunch of kale. So I asked The Guy which he would prefer, lightly-sautéed wilted kale on the burgers in place of lettuce, or kale chips, which I had never made but wanted to try? He opted for the chips. So Side #1 was kale chips.

Did you know that kale chips made with smoked paprika, garlic powder, and slightly too much salt taste a suspiciously lot like barbecue potato chips?

THESE KALE CHIPS TASTE LIKE BARBECUE POTATO CHIPS AND I AM SO HAPPY. 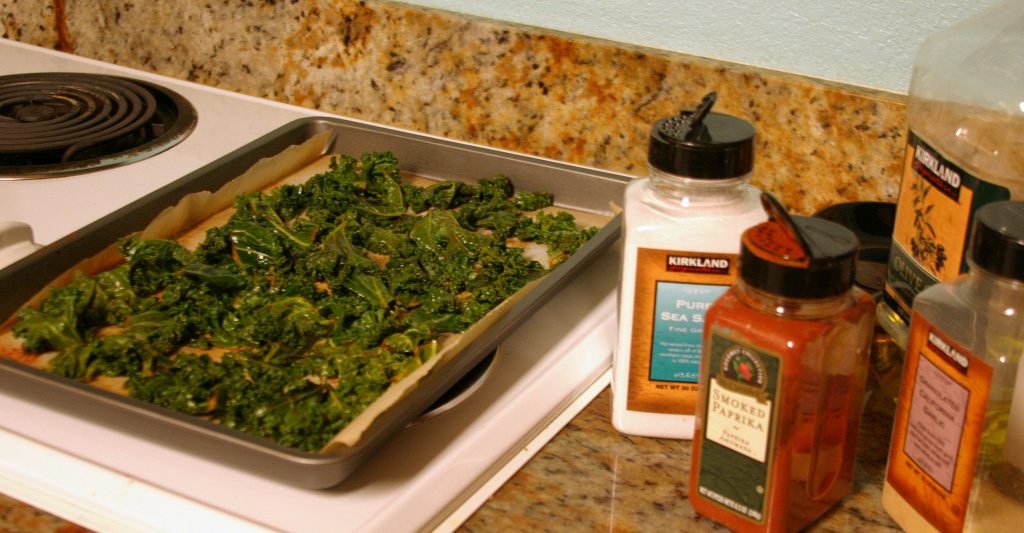 – Preheat oven to 350°F
– Wash and pat dry kale leaves, tear from stems and into chip-sized pieces. I had a smallish bunch of kale, and it about covered a half-sheet baking pan. I used a pan lined with parchment paper mostly because it’s the same pan I had just used to roast the peppers and I’m lazy and it was already done, but it’s not strictly necessary.
– Drizzle the kale leaves with a bit of olive oil (I used about 2 teaspoons for my smallish bunch), then lightly sprinkle with salt, garlic powder, and smoked paprika (I used about 1/4 tsp each). Toss to evenly distribute the oil and seasonings, then taste and add if/as needed.
– Bake for 10-12 minutes until crispy.

Even with hummus on both sides of the buns of two burgers, there was still some left in the bowl. I was not putting this bowl back in my refrigerator. So Side #2 was cucumber slices, to scoop up the remains.

Next time, I will put more hummus on the burgers. 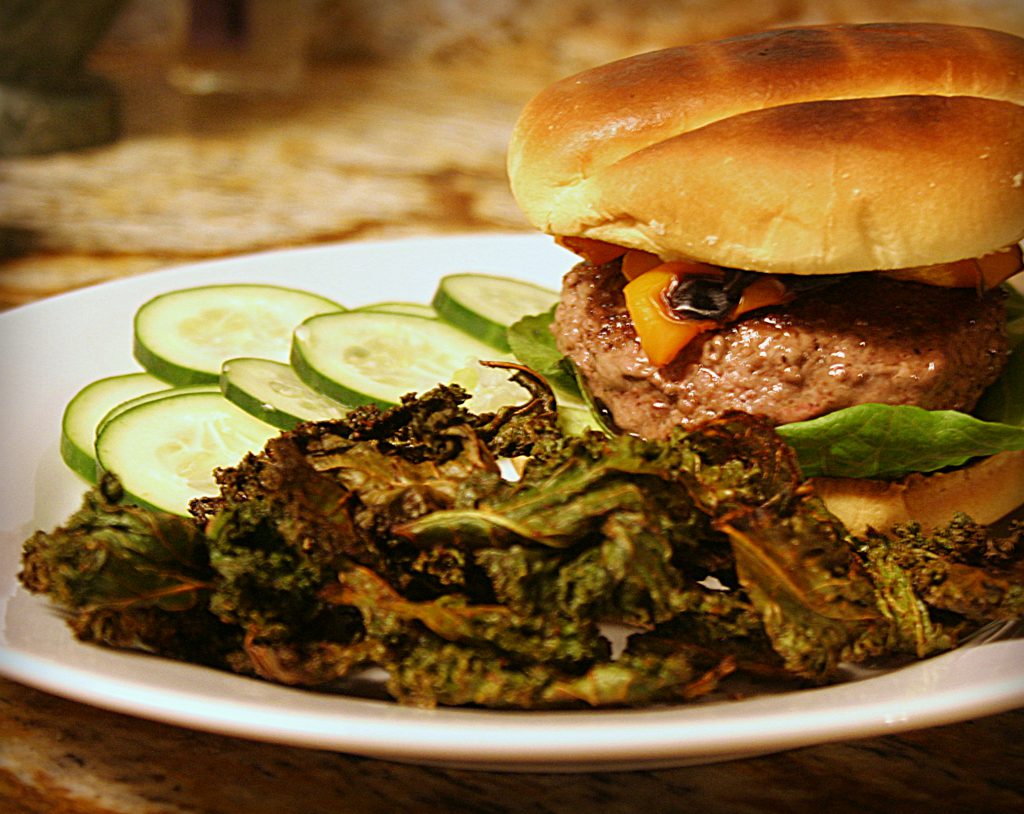