Why Boaty McBoatface is a Really Good Idea

There are not many nice ways to say this, so I’m just going to say it as simply and directly as I can; science has a tendency to get a little up its own ass and consequently suck at PR.

Not to say that isn’t an understandable thing.  When your job is to figure out what could be, the tendency to distance yourself from what is becomes a necessity.  Case in point, Nikola Tesla.  When your head says “I know how we can pull electricity out of the air and make it free for everyone” while the world around you is saying “This person is going to die from a minor flesh wound because Neosporin hasn’t been invented yet” chances are good you’re going to fall in love with a pigeon.  There’s only so much the human brain can do as far as coexisting between The Is and The Possible before something has to give.

And what usually gives is the effective communication between the scientific community and the general public.

With Boaty McBoatface, we have a chance to bridge that gap. 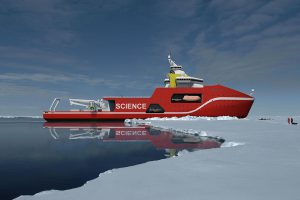 It began as a joke.  In case you haven’t yet heard the story, the NERC is building a multimillion-dollar research vessel which they plan to launch in 2019 for the purpose of collecting data on conditions in the Arctic and Antarctica.  It’s going to have robot submarines and everything.  Many types and layers of awesome happening there.  They put out a call to the Internet to name the ship.  The current frontrunner, by thousands of votes, is the RRS Boaty McBoatface.

Some people are upset about that because they feel the Internet isn’t taking this whole business seriously enough.  The person who originally suggested that name has apologized for doing so.  The powers-that-be have made it clear that the Internet vote is only suggestions and will not determine to final name, strongly implying that, even if BMcBF wins the vote, it will likely not be painted on the side of the vessel.

Which to my way of thinking would be a huge mistake.  Because Boaty McBoatface is a big bright shiny stack of exactly what the world needs right now.

We are at a point in human history where it is absolutely crucial that science and citizenry be on the same page.  The world is kinda screwed, and science is our best chance of unscrewing it.  But a lot of people are scared of science because science has not put as much effort into PR as it has put into making cool and necessary shit.

There are roughly seven billion people on this planet, all of whom need to eat.  Traditional agriculture methods will run out of both water and farmable land before it is able to feed them all.  GMO crops are a really good and perfectly safe way to feed a lot more of those people than we are currently able to feed.  But a lot of people are afraid of GMOs now because science didn’t start explaining them properly when it should have.  If your friendly mascots Gina, Molly, and Oscar had been around in the 80s reassuring you that GMOs are really nothing more than a very precise (and as a result much less prone to unwanted side effects) method of achieving what agriculture has been doing in one form or another pretty much forever, and that scientifically speaking there’s really nothing you eat that hasn’t been genetically modified by human activity in one form or another anyway, they wouldn’t needlessly scare you.

(Remember that time you engineered an artificial ecosystem for the purpose of locally sourcing comestible output?  Except you called it “planting a pot of tomatoes in your backyard”?)

Vaccines do not cause autism.  Science has proven this completely, irrefutably, it is so not a thing.  But people continue to believe they might, and continue to not vaccinate, and continue to contribute to the resurgence of deadly diseases that were all but eradicated not long ago, because science continues to present itself as a cold and distant authority, throwing facts in our faces like a Knowledge ATM gone crazy, insisting it is imparting wealth while all most people see is a bunch of pieces of paper flying at their eyeballs.

Polar exploration of the type that NERC has planned will likely provide some answers to the question “Just how screwed are we?” on the subject of climate change.  That is a big scary question, the answer to which few people actually want to hear.  But we need to hear it.  Because hearing the answer to that question is the only thing that will give us the tools we need to even attempt to reverse some of our screwedness.  However, there are different ways in which answers can be presented.  So which is more likely to get a response?

“Boaty McBoatface and his buddy Emmy the Emperor Penguin say it’s a great day for you to give Mom a carpool break and walk to soccer practice!”

Is the second option overly simplistic?  Yes.  Is it somewhat childlike?  Yes.  Are either of those things bad things when presenting frightening information to an already frightened public?  Not even a little bit.

And in addition to PR, there is another very important benefit to the RRS Boaty McBoatface.  It will, through humor, through lightness, through the ability to say “We’re aboard the RRS Boaty motherfuckin’ McBoatface!” when things get strained, it will keep all who sail her in touch with the very people whose lives they seek to improve.

Boaty McBoatface will be the safe solid foundation grounding us in what is while we look at what could be, allowing us to obtain knowledge without falling in love with pigeons.

NERC, for all of our sakes, please make it so.