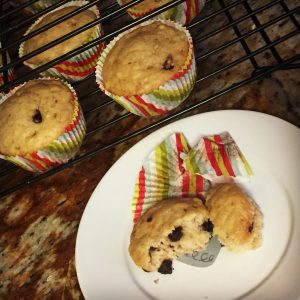 This recipe was born of my sourdough starter threatening to gain sentience and run away with one of the backyard squirrels if I left it alone any longer, and my sincere belief that I could not refrain from stabbing myself in the face with a railroad spike if I had to make another banana chip.

In my ongoing effort to both minimize my carbon footprint and avoid as much as possible subjecting my hermit self to a very peoplely world, my grocery shopping is done once a week, at Costco. Sometimes, not all of the bananas are eaten by the end of the week, and sometimes, when the weather is particularly hot, the bananas begin to turn after about 4 days. I keep half a dozen in the freezer for baking, and the rest become banana chips.

It is August. June and July were particularly hot this year. The math = all the banana chips of all the lands currently on my kitchen counter. I’ve no evens left to can’t with all these fucking banana chips. But when I got home from Costco today, there they were, 3 overripe bananas on the hanger. Taunting me. Daring me to ignore them. Being total bananuses.

Fortunately, I was raised in an environment that teaches 3 overripe bananas pretty much automatically translates to banana bread. At the thought of bread, I remembered my poor sourdough starter sitting alone and unloved for weeks while we had construction done on the house and I had zero time to bake. Which also means it’s been a very long time since I’ve sent The Guy to work with baked goods. And when I bake for his coworkers, I go vegan so everybody can share the joy.

Slightly mash the bananas in a mixing bowl, then mix bananas, shortening, sugar, starter, aquafaba and vanilla on medium until blended. Add baking powder, baking soda, salt, and 1 cup of the flour, and mix on low until smooth. Stir in remaining cup of flour until just combined, then stir in chocolate chips.

Line muffin pan with paper liners and give them a quick shot of nonstick spray (really, do this, because I did not and would feel better knowing someone learned from my mistake). Fill cups 2/3 full, and bake for 20-22 minutes, until they pass the toothpick test and tops are ever so slightly brown. Remove from pan and let cool on a wire rack for as long as possible before you have to eat one because holy crap they smell so good you have to know if they taste that good and they do so that all worked out well.