So I guess we need to talk about nose hair…?

Recently, the existence of a product was brought to my attention by one of myriad mailing lists I’m on as a result of not liking most people and doing the majority of my shopping online to avoid people-y situations.

The product is this. 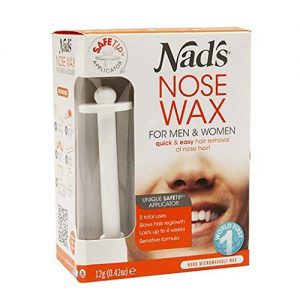 And I’m going to write something now that I really never thought I would have to say, and I implore you to read carefully and heed my words:

Seriously. Just don’t ever fucking do that.

I’m not saying I can’t see why you might be tempted. I think we can all agree that nose hair is not sexy. But nose hair is necessary and yanking it out by the roots is one of the worst ideas anyone ever had. It’s on the same list as lawn darts and lime Jell-O tuna mold of things that should not be.

But isn’t nose hair just proof that evolution hates us and wants us to be gross and ugly?

Mammals grow hair for a reason, and contrary to what you may feel, that reason is not because somewhere along the evolutionary chain of events it was determined that your chances of survival would be improved if you were walking mass of hair and bad smells. Hair and bones exist to protect your most important parts. Your brain got both. Your vital organs got bones. And your sensitive outer bits got hair. All of these things are there to help you not die.

There is a really good reason it hurts like a flamethrowing bitch to yank hair out of your body. Because that hair isn’t supposed to come out of your body. It is supposed to stay there to protect you. In the case of nose hair, it is to protect you from airborne particulates like dust and pollen and small birds and loose hood ornaments entering your lungs when you inhale.

But you shave and wax stuff, so why shouldn’t other people?

I do shave and wax stuff, and will never say I don’t or that no one should ever. The crucial distinction I ask you to consider is whether or not removing hair from a specific area will leave your body vulnerable to the things that hair is protecting you from.

For instance, I can shave my legs because I am no longer my Neolithic ancestors in need of something to keep my legs from being attacked by 4 pound bugs as I walk around familiarizing myself with the foundation of modern agriculture. Bugs are smaller now and I have pants. I can wax my bikini line for the same reason. The pants, not the bugs. I mean, I guess if there were ladybit-attacking bugs afoot, pants would also protect me from those, but until I typed that just now I must admit that thought had never occurred to me. So bonus points for pants.

Clothing has negated a great deal of the need for protection once provided by body hair. We don’t need leg and arm and chest and pubic hair like we used to. So if you want to get rid of it, knock yourself out.

For some of those areas, seriously, if knocking yourself out is an option, go with it.

But waxing the inside of your nose is like plucking out your eyelashes. There is no comparable man-made protective measure. There are no face pants.

But you can look like not that while still keeping the natural protection of your nose hair intact. Truth be told, I come from hairy stock and I’m not sure I wouldn’t look like that if left to my own lack of devices. That’s why I have a device. It’s adorably dubbed a “personal trimmer” because I guess “that thing on Instagram you can never unsee-preventer” didn’t fit on the package.

Because I’m right there with you in not wanting to cultivate a lavish flowing mane of nose hair.

I hope you will be right there with me in wanting to not die.