To this day, his custodianship of Gabby Reece’s Mom’s Harp remains something of… I won’t say a mystery because the how and what of it are clear. It’s the why that catches.

At first, the job description was straightforward enough: “Put Gabby Reece’s Mom’s Harp in storage with most of your other belongings, drive around the country for months, move to Eastern Europe.”

Even after moving back to the States in 2009, the job wasn’t terribly difficult or complex: “Remember you have stuff in storage at the other end of the state where you currently reside, occasionally contemplate the stuff, offhandedly mention to your live-in girlfriend that the stuff includes but is not limited to Gabby Reece’s Mom’s Harp.”

To which my reply was something along the lines of “…what”

At some point in 2010, we had the storage pod relocated from San Diego to NorCal so the stuff was at least in the same county as its guardian, thereby cutting through the already barely-even-theoretical thread tying us to ever actually reuniting Gabby Reece’s Mom’s Harp with Gabby Reece’s Mom. For better or worse, we owned a harp now.

In 2011, we got word of a music-themed photo contest, and decided Gabby Reece’s Mom’s Harp was just the thing to set us apart from the competition. Off we went to visit the pod, sort through its contents, and retrieve our newest family member.

She had seen better days, had Gabby Reece’s Mom’s Harp. Whether the damage was sustained during the initial loading into the pod, or its transit along 300+ miles of California coast, we will never know, nor will it ever be relevant. Damaged it was, but still usable for our purposes, so we hauled it back to our apartment.

Pro Tip: If you ever want to haul a full-size standing harp in the back of a Ford Escort, you need to want other better things.

The three of us took this prize-winning* photo

and the two of us responsible for such decisions agreed it wasn’t worth hauling Gabby Reece’s Mom’s Harp back to storage, so she took up residence in our 800 square foot apartment and rarely let a day go by without making her presence bookshelf-blockingly toe-stubbingly large-object-dust-collectingly known.

About six months later, we bought our magnificent 70s quad-wide mobilehome, its outdated floor plan complete with a family room large enough to serve as a fully-equipped photo studio, a corner of which was set aside just for Gabby Reece’s Mom’s Harp.

You may be shocked to learn that the damage sustained during Pod Life was not made better by a second move. The soundbox was cracked, the base unstable, the only standing this standing harp could do involved leaning heavily on our 1979 wood-paneled walls like a ligneous bar crawler and her designated driver, and much the same as with the human counterpart to that tableau, I chose to look away as often as possible to spare us all embarrassment.

But in the back of my mind were dreams of all that Gabby Reece’s Mom’s Harp could become. She would never exist as a functional musical instrument again, but her potential as a shape-shifting prop was downright endless.

I had visions of neon pink paint and Hello Kitty stickers. Black leather and spikes. Wallpaper and duct tape and first aid gauze and a new identity every year. The form was there. We just had to do enough repairs to get Gabby Reece’s Mom’s Harp standing on her own again.

She was once again relegated to her corner, still telling the walls she just loved them soooo much, now with her strings hanging like overcooked fettuccine and a microphone stand propping up her pillar.

And every few years between 2013 and 2022, Jerry and I would have The Talk, a conversation that consisted of me opening with something like “we should talk about Gabby Reece’s Mom’s Harp” because I never referred to her by anything other than her full name, and him replying with something like “yes, we should” and that exchange being followed by some nodding and some mentions of strap clamps and wood glue and nothing ever being resolved or accomplished.

In 2022, we began in earnest the long-planned renovations of our 70s mobilehome, and the first stage of that was the clearing out of unneeded and unused objects. Most of them were things we could take to Goodwill on our own. But then a cheap couch I’d had since the early 90s had the audacity to not survive my attempts to singlehandedly move it from the studio all the way across the house to the garage and throw it over a railing, and needed to be hauled away by professionals.

And on that day, I said to my husband, my best friend, my partner in all things, unto him I said “my love, today we really need to talk about Gabby Reece’s Mom’s Harp.”

Turns out it was a very short conversation. 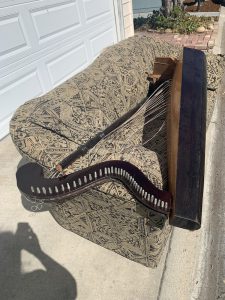 In retrospect, I realize that left to his own devices Jerry probably would have gotten rid of Gabby Reece’s Mom’s Harp long ago, knowing it couldn’t be salvaged, but never pressed the issue knowing it meant something to me and not wanting me to feel pressured to give up on those amorphous impossible dreams. It’s one of the things I love most about him, his willingness to let me think ridiculous things and stand by my side with wood glue and strap clamps and unwavering support until I’m ready to let those dreams go on my own.

Gabby Reece’s Mom’s Harp, wherever you are now and whatever you’re doing, which is likely disintegrating in a compost heap somewhere and I probably shouldn’t think about it, thank you. Thanks for your time with us. Thanks for the photos. Thanks for giving me yet more proof of my husband’s love.

Thanks for the memories.