An Open Letter to Home Depot

Earlier today, a friend posted this photo on Instagram 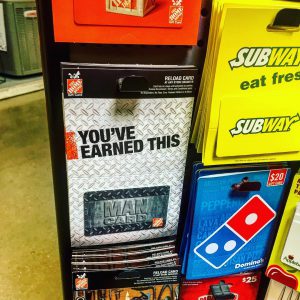 Now, the fact there is an Instagram that exists, on which my friends can post these things, that is found on the Internet, told me my initial suspicion was correct, but I glanced at the upper right corner of my 27” iMac just in case.  Sure enough, it’s the year 2016.

So I’m sure you can understand my confusion that there is a Man Card available for purchase, that men have earned apparently by virtue of being men, but no corresponding Woman Card that a woman could have earned by being a woman.

In case you can’t understand that, allow me to clarify.

Women make stuff.  We improve stuff.  We build stuff, and repair stuff, and turn stuff from the color the stuff was to the color we want the stuff to be.  And not all of those processes involve Bedazzling and decoupage and nail polish.  Sometimes, they involve lumber and silicone adhesive and power tools and the kind of paint that is found at the hardware store rather than the craft supply store.  Case in point, this: 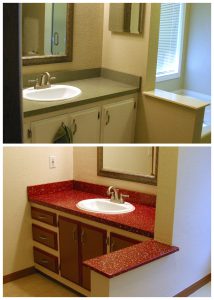 That is the before-and-after of my most recent project.  That is my bathroom.  I did that all by my lil’ vagina-totin’ self.  There was no man in sight when it happened.  Truth be told, I waited until he was a few states over so I could be sure he wouldn’t get in my way.  Because I wanted to do it my way, I was capable of doing it my way, and I did it my way.

And when it was done, I took a nice bubble bath and gave myself a nice facial and a nice pedicure and bought myself a nice pair of new shoes to celebrate.  That is also doing things my way.

The point is, you are not only being more than a bit misogynistic and insulting by offering a gender-specific card for only one gender, you are missing out on a huge marketing opportunity.  On my friend’s original post, someone observed that there are gender-neutral gift cards available, but guess what?  I don’t want a gender-neutral gift card.  I don’t want a hardware store gift card that ignores the fact that I’m a woman.  I want one that embraces that fact.  I want to feel every bit as happy and comfortable with my femininity while shopping at Home Depot as I do shopping anywhere else.

And I know I’m not the only one.

So, here are a few suggestions for potential Woman Cards that we, as women, have earned by being women. 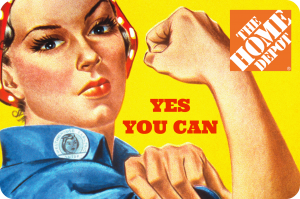 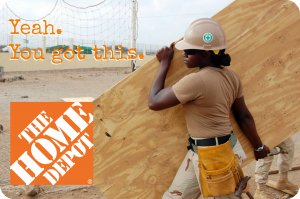 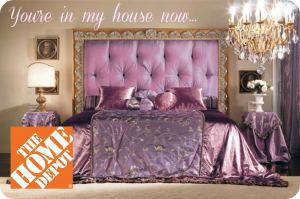 I look forward to being the recipient of one of these, or something much like them, in the very near future.

Sincerely,
A woman who makes, improves, builds, repairs, and changes the color of stuff