An Open Letter to Cora

Last year, I signed up for a subscription with Cora. If you’re not familiar with the company, they make cruelty-free period products and also donate pads to girls in need. Animal testing in this day and age is frankly ridiculous, and period poverty is a serious issue, so I was happy to find a way to support people doing necessary work while obtaining a product I needed anyway.

When I signed up for the subscription, I knew my days of doing business with the company were numbered because I’d already been dealing with perimenopausal crap for well over 6 years. I wanted to support them while I could but I was well aware that I would not need tampons for much longer. Sure enough, very soon after I received my first 3-month supply, I started having substantial gaps in my previously fairly regular cycle. I skipped a few deliveries, but still have a substantial supply of product in my bathroom cabinet.

So when the reminder I set to check my Cora subscription popped up on my phone this morning, I went to my calendar, flipped quite a few months back until I saw the little circle I draw indicating that my period started that day, and accepted the time had come to go ahead and cancel.

I paused a moment to process that before going to their website. I am almost 50 years old. I have been having periods for almost 40 years. That is a core part of my reality, existing as a biological thing that has periods. Another core part of my reality is the struggle with depression that, for me, has always been inextricably linked to the having of periods. I have no way of knowing if menopause will alleviate or exacerbate that depression. Obviously I hope for the former, but until I’m there it’s anyone’s guess.

Then there is, of course, the mass of cultural and societal bullshit attached to menopause. “A lady never reveals her age” is nothing more than a thinly-veiled rephrasing of “a woman is only worth her ability to produce children”. There has been a great deal of progress in recent years vis-à-vis different body types being accepted as beautiful and sexy, but the common thread among most of those movements is still that the bodies in question are young. Once you are well past a certain age, you can move into the realm of “inspirational” with the likes of Betty White and Baddie Winkle. But there are many years in between “not young” and “inspirationally old by living like you don’t give a fuck”. Years when a lot of women feel pretty invisible.

I was now cracking the cover on the very thick calendar of those years with my acceptance of the truth that this, most likely, was It. This was menopause. This was the beginning of a new chapter in my life as a biological female. It would be weird. It would be challenging. Parts of it would be amazing, parts of it would suck. But much like puberty, it wasn’t going away because I wasn’t ready to deal with it. So I took a deep breath, took my moment to process, and went to the Cora website to make it official.

And that’s when my mood went from being a mix of introspective, oddly nostalgic, a little sad, a little apprehensive, but ultimately ready to make my peace with my new reality, to being one single laser of royally fucking pissed off. Because the options for ‘Reasons for Canceling’ were as follows: 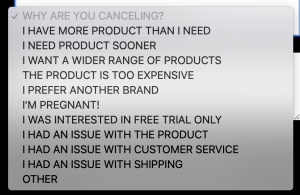 Even a company claiming they exist to empower women couldn’t be bothered to acknowledge this most normal, natural reason for no longer needing period products. Menopause was an “Other”. Middle-aged women didn’t even warrant a line on their dropdown. If I wanted them to know the real reason I was canceling, I had to type it out in the comment field. Which I did, as scathingly as possible because this was a level of bullshit I was not expecting from this company.

Had “I’M PREGNANT!” not been on the list, I would have been considerably more okay. All of the other reasons are things that, as a business, you want to be aware of so you can change them.

But acknowledging, nay celebrating! one obvious physical reason for not needing period products while omitting another equally obvious reason is problematic.

Unfortunately, in this instance, by congratulating the first group and ignoring the second, you are feeding the narrative that women who aren’t having children aren’t as relevant as those who are. It’s the “a lady never reveals her age” of subscription cancellation reasons.

Adding further insult was this follow-up email I received from the founder of the company, under the subject line “I’d love to hear from you. How can we improve?”

So, Molly, this is you hearing from me, about my experience and how you can improve.

You can not relegate menopause to the “Other” corner. You can not put women who are already a bit emotionally unsettled in a position of feeling like they have to explain themselves. You can add “MENOPAUSE” to your dropdown list of reasons for canceling. You can make that one small gesture to validate this transition from one stage of womanhood to the next, the same way you are validating the transition to motherhood.