This morning, a friend posted a link to this article on my Facebook page, the whole point of which is, clearly, this photo of Miss Canada decked out all to hell and back for the Miss Universe pageant. 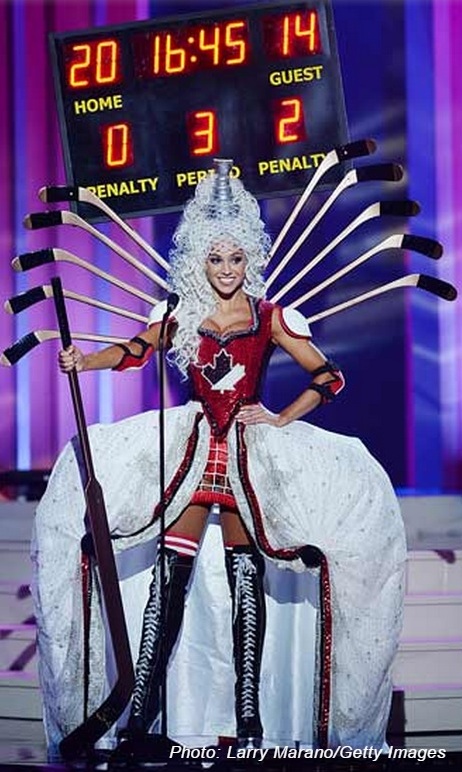 Enough people have voiced enough mixed opinions that I just wouldn’t be me, as a pinup, a woman with all the deepest respect for showgirls, and a hockey fan, if I didn’t chime in with my two cents.

First off, it’s the fucking Miss Universe pageant.  If you are looking for subtlety, understatement, or restraint, you clearly missed a memo.  That group meets at The Gap on Thursdays at noon.

Second, we wouldn’t likely be having this conversation in the first place if the rest of the universe were even trying.  It is not.  A representative from Earth has won every single year from 1953 right up to 2013, and I have absolutely no doubt that we will take the 2014 title as well.  I also have absolutely no doubt that with very little effort, Jupiter could knock the crazy crown right the hell off anything past Miss Universe contestants have come up with.

But back to the here, and the now, as I break down element by element my feelings about Miss Canada’s hockey-themed ensemble, starting at the top.

What the actual literal living breathing everfucking fuck are we being asked to believe here?  To paraphrase the great Guy Fleegman, do you guys ever watch the game?  Assuming it were somehow possible for the score in any game to be 20-14, it certainly wouldn’t be any game with only two penalties at the beginning of the third.  I get you wanted 2014 in there with bright lights and special effects, but do your research.

I am not going to lie to you, I now want a Stanley Cup tiara.

That headpiece is a thing of beauty.  The wig looks like snowdrifts, for crap’s sake, how do you not love that?  And much as some people may not want to admit it, the shape of the Cup lends itself beautifully well to inclusion in a full-blown showgirlesque headpiece.

Those shoulder and elbow pads are perfectly executed.  Big enough to make the point they’re meant to make, stylized enough to not take anything away from the fact that this is, after all, one of the most beautiful women in the world wearing a Miss Universe version of protective gear.

A certain Snidely McSnarkerpants likened this aspect of the outfit to “a crazy hot rod exhaust system.”  Well, sir, you might want to look a bit closer because, when you do, what you will see is a highly stylized and frankly really clever riff on the evermore-outrageous-every-season angel wings seen at the world-renowned Victoria’s Secret fashion show.  Those sticks are brilliant.

Yes, the original article was justified putting quotes around “jersey” in this instance because it is, after all, not a jersey, for two reasons.  The first being, the word you want is “sweater”, and second, again, it’s the fucking Miss Universe pageant.  So yes, she’s wearing a sparkly pageant version of the Team Canada uniform.  Do you know why?  Context.  Wearing anything even remotely true to the original, in this context, is what would have been truly ridiculous.

Third, have you seen the body on that girl?  She could have gone much further with that part of the outfit and accented every single damn one of her curves.  Instead, all she did was push up her boobs and keep the rest structured, somewhat blocky, more reminiscent of, oh I don’t know, an actual Team Canada sweater complete with protective gear underneath.  Something like that.

Truth be told, the net loses me.  I see what they were going for, but they didn’t get there, and I’m left reminded of Carol Burnett in Went with the Wind.  If they had framed it in a way that more closely mimicked an actual hipline, that would have been better.  Better still would have been to scrap the white satin and use the same net they used on the headpiece.  Better even more on top of that would have been to scatter a few Swarovski crystals over the whole thing.  Not a lot, just enough to keep it pageant-like.  And lose the pucks, they just don’t work.

Or, change the Team Canada corset to an underbust and throw in some puck pasties.  I don’t know exactly how much you can get away with at the Miss Universe pageant, that might be pushing it.  Or it might not.  Either way, now I want puck pasties to go with my Stanley Cup tiara.