Before you judge my asshole dog…

You know those dogs that aren’t quite like other dogs? The ones with malformed or missing limbs, or mangled faces, or no eyes? You see those dogs, be it in real life or on the Internet, and you know some shit went down somewhere. Birth defect, injury, abuse, something went very wrong at some point in each of those dog’s lives and rendered them different dogs than nature intended.

You see a dog with three legs at the park, you don’t judge that dog for not being as fast or as coordinated as the rest of the dogs. It’s obvious that dog has a less-than-complete Dog Tool Kit, but is going about dog business regardless, as well as possible.

Unless you are the worst sort of asshole, you would never judge a dog like that. Quite the contrary, you probably think of those dogs as brave, or inspirational, and the humans caring for those dogs as heroes of a sort. 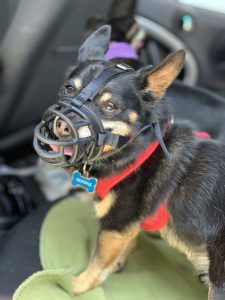 You might be amused by the sight of a 10 pound dog in a muzzle. Or you might question, aloud, why such a small and therefore clearly not dangerous dog would need to be muzzled. You might make assumptions, aloud, both about the dog and the humans caring for him, about improper discipline and ignorance of how dogs should interact with each other. You might comment, aloud, that he should be allowed to “just work it out with the other dogs” because what harm could come of it, and it would be “good for him”. And when you see him unable to “just work it out” and try to attack other dogs, you might think, aloud, that maybe he shouldn’t be at the park in the first place.

And you would be wrong on all counts. Well, except the amusement, tiny badasses are kind of funny, I’ll give you that. But the rest of it? No, no, no, and no.

The dog you see in the above photo is named Gilfoyle. He is our dog, and he has mental health issues.

We adopted Gil when he was about 9. Due to a mixup at the shelter, the records that might have given us a better idea of his history had been lost. We brought our other dog with us to meet him, and the shelter volunteer we met with said he was glad we had because “he… doesn’t always get along with other dogs”. That slight hesitation was the first indication we had a special needs critter on our hands, but he and Byng got along well enough, so Gil became a member of the family.

And Gil immediately showed all signs of being a complete asshole.

We thought a lot of maybe justs. Because that’s what you think with dogs. “He just needs…” and you do what you think is best to meet needs you can only guess at because dogs can’t tell you what’s actually wrong and what they really need.

You think love. You think training. You think stability, and routine, and reassurance. And all of those things are really important.

But you probably don’t think mental illness. And when that’s what you’re dealing with, all of the above are crucial, but they don’t address the root of the problem.

So we gave Gil love, and training, and stability and routine and reassurance. We gave him the slowest and most careful introduction to other dogs that we could manage. We gave him everything we thought a dog needed to be a happy dog.

And Gil continued to behave like a complete asshole.

He tried to attack pretty much every other dog at the park. There were a few he learned to ignore as long as they kept their distance, but there were also a few that could be half a block away and he’d try to go after them as soon as he caught their scent. He would charge the fence that separated the big dog side from the small, because big dogs pissed him off most of all. We kept him on-leash in the off-leash park to prevent any harm, but more often than not I’d just take him for a solitary walk while Byng stayed to play. He loves walks so it wasn’t a hardship, but it wasn’t what I wanted for him. I wanted him to be happy. Happy dogs played with other dogs. Or at least didn’t try to eat other dogs’ faces. Gil was clearly not a happy dog.

And the root cause of that soon made itself known.

It was a quiet night. The whole pack was in The Big Bed, about ready for lights out. Gil was settled into his usual spot, when he suddenly sat bolt upright, wide eyed, and started trembling and panting. He tried to jump off the edge of the bed so I lifted him down. He ran to the living room. Then he ran to his pillow fort. Then he ran to the door, so I let him out, thinking maybe something was upsetting his stomach. He took a step out, then came back in. Ran to his bed in the laundry room. Ran back to the pillow fort in the living room. Ran back to the bedroom, then to the back door, then to the laundry room, he had no idea where he was going, where he wanted to be, what he wanted to do when he got there, he was just moving as quickly as he could, panting and shaking the whole time. I watched him, thinking something seemed really familiar about the behavior I was seeing, and then it clicked.

Gil was having a panic attack.

Gil had severe anxiety and was having a panic attack and wasn’t just a little asshole dog who needed time and training. Gil needed the kind of help that addresses a chemical mental health issue. And in that moment, so many things made so much sense.

I brought him to the vet, explained what had happened, and we started him on a low dose of Prozac. Over the next few weeks, there were a few small episodes as the meds built up to a therapeutic level, but I was watching him like a hawk and was able to keep those from turning into full-blown panic attacks by immediately strapping him into his Thunder Shirt and holding him until he stopped shaking.

I’m happy to say there have been no more panic attacks since we started him on the meds. I wish I could say the meds had miraculously solved all his problems, but alas, he continued to behave like an aggressive little asshole toward most other dogs.

He needed a muzzle.

I had suspected for a while that it would be necessary, and it saddens me to admit the reason I put it off as long as I did is due to the stigma surrounding muzzles. I didn’t want people to see Gil and think he was a “bad” dog, and if I’m being completely honest, I didn’t want people to think I was a “bad owner” who didn’t know how to train my dog. I put off doing something I knew would be beneficial due to what other people might think.

Until another dog almost got hurt when Gil got away from me at the park and latched onto her face. She wasn’t physically harmed, but she was terrified.

Gil has been wearing his muzzle to the park ever since, and the people who’ve known us since we adopted him are amazed at the difference it’s made. He’s a changed dog. We can let him off-leash in the park, and give him the opportunity to communicate with other dogs as a dog, without having to intervene the instant it looks like he might get aggressive. And he’s learning how to be a dog with other dogs, from behind the safety of his mask. He’s calmer, he’s friendlier, he still barks a lot and there are still certain dogs he will always try to attack but we recognize his triggers now, and the solitary walks have become the exception rather than the routine.

So if you’re wondering why a 10 pound dog has a muzzle, it’s for the same reason a paraplegic dog has a wheelchair.

And if you’re thinking maybe this whole post isn’t entirely about my dog, and might also perhaps be a giant 1800-word allegory for how human beings view and treat other human beings, and our perception of mental health issues in general?

Damn right it is.