Earlier this week, I signed up for a weekly delivery from Imperfect. They sell ugly produce considered not salable through more traditional outlets due to, as the name states, imperfections. By doing so, they reduce waste of not only food but water and land, help farmers get paid for more of their harvests, improve our entire food system in a lot of ways. I am all about this.

Last night, we received our first delivery. And I am absolutely furious right now.

Not with Imperfect. I love what they’re doing and I hope they continue to expand and do a lot more of it.

But pictured here are two of the items that were in the box. These are the “worst” of the lot, the “ugliest” produce in my ugly produce shipment, the most “imperfect” things Imperfect left on my doorstep. 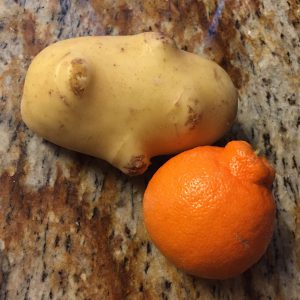 Which begs the question, WHAT EXACTLY THE FUCK DO PEOPLE THINK PRODUCE IS SUPPOSED TO LOOK LIKE?

That orange is not “imperfect” in any way. It’s a Dekopon. THAT IS EXACTLY WHAT THEY LOOK LIKE. That could be the goddamn poster Dekopon for The Dekopon Society of Perfect Dekopons Who Only Love Other Perfect Dekopons.

That potato? Let me tell you a little something about potatoes. They’ve nary a fuck to spare for your baking mashing herb-roasting au gratining plans. As far as potatoes are concerned, they exist for one reason; to make other potatoes. Every “ugly” lump on that potato was a potential root, which would have been a potential plant, which would have made more potatoes, AND THAT’S THEIR ONLY JOB.

Also in the box were a couple of apples that I could not find shit wrong with, a couple of onions that I could also not find shit wrong with, a bunch of carrots that tragically were not all the same goddamn size down to the last millimeter, a golden beet that probably ended up in the box because too many people don’t understand that NOT EVERY BEET ON THE PLANET IS RED SO GET THE FUCK OVER THAT OKAY, and a bunch of kale that is some of the most beautiful kale I’ve ever seen so I have no fucking clue how Imperfect ever got their hands on it.

This is our “ugly” produce. This is our “imperfect” food. This is what is far too often just getting thrown away while people are going hungry.

This is utter bullshit.