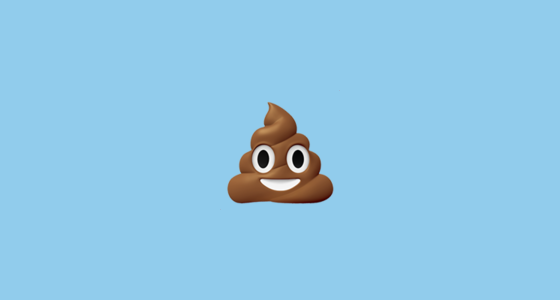 One of the best things about being a dog mom is the amount of time and energy you get to spend monitoring poop. In case you ever worry that my life is getting too glamorous.

Part of tracking a dog’s health is tracking their poop for quantity, quality, and inclusion of small toys and household objects. This is true even with young healthy dogs, but when you have a senior dog on medication for a known health condition, your poop sleuthing ratchets up a few notches.

Gilfoyle was already 9 when we adopted him, so I’ve pretty much been living at POOPCON 4 since the day we brought him home.

A few months back, his vet discovered a cardiac arrhythmia. Soon after, Gil was diagnosed with DCM. This necessitated a diet change, and he was put on 2 medications to slow and regulate his heart rate.

In addition to the list of cardiac-related symptoms we were told to be on the lookout for, we were told to also keep an eye out for any signs of gastrointestinal distress the new diet and meds might cause.

And POOPCON 3 became my new reality.

About a month went by with all seeming well. Gil had more energy and stamina, all signs pointed to the heart meds doing their job and the condition being controlled, and he was tolerating the new diet fine.

Then, suddenly, he just wasn’t pooping much.

Our two dogs can both be serious little brats in their own ways, but one considerate thing they do is make it very easy for me to track whose poop is whose by each having their preferred potty area in the backyard. So when a few days went by where I found myself picking up about 40% less than I should have been, I knew exactly which dog was having the problem.

I assumed garden-variety constipation and contacted his vet, who gave me a very specific outline of exactly what quality and quantity of poop was low normal, and instructions to bring him in if I wasn’t seeing what I should be.

And we escalated to POOPCON 2.

Some days it seemed all was well. Some days I was convinced something was extremely wrong and I was an idiot for not being able to see it. Then the next day he’d be fine. Then the day after that, almost nothing. His poop production hovered just close enough to the edge of low normal that I didn’t feel the stress on his heart of an extra vet visit was warranted, but I continued to watch him like a hawk, ready for the jump to POOPCON 1 at the slightest provocation.

I was baffled. His vet was baffled. In the complete absence of symptoms, she had no idea what to even attempt to treat. So she recommended a fiber supplement and told me to just keep watching him.

Which I did, and saw only more of the same. Holding steady at POOPCON 2.

Until the time there was nothing in his potty area for a full 24 hours. As my mind escalated to POOPCON 1 and I began mentally restructuring my entire life to accommodate whatever veterinary procedures would be necessary to keep my dog alive, I said “little man, did you really not poop at all yesterday?”

My husband, overhearing my lament, called from the other room, “He did, last night when I was sitting outside working.”

So I went and checked Gil’s potty area again. Nothing. “Are you sure?”

To which he replied “I’m sure. I congratulated him on a fine poop because I know it’s been a concern.”

We both went and rechecked the potty area. I had not missed it, there was still nothing. And I said “So… okay… what, did somebody steal his poop?”

Did you know that raccoons, opossums, and sometimes skunks will eat dog poop?

I didn’t, until I Googled “what nocturnal animals eat dog poop”

So that’s… a thing. That we all know now.

Remember how I said each dog has their own preferred area? Gil’s is under the tree. The tree that provides the easiest access to the yard for climbing critters. During the day, it’s squirrels.

At night, it’s The Poop Thief.

Deescalated to POOPCON 4 and holding.