The Decline of a Warrior

I missed posting to the blog yesterday. The reason for that is, what should have been about 45 minutes out of my morning turned into over 3 hours. That time was spent at the vet’s office with this little girl. 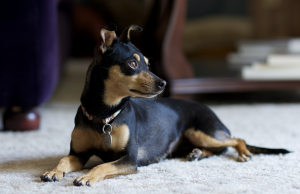 As many of you know, her name is Lady Byng. To the best of our knowledge, she is a Min Pin mix of some sort, and a little over 8 years old.

The shelter estimated she was about 2 when we adopted her. She had been picked up as a stray, and it was evident she’d had puppies at some point. When they took her in to be spayed, they discovered a massive infection in her uterus, so if they hadn’t picked her up when they had, she probably wouldn’t be alive today.

With over 6 years to observe her behaviors, and fully appreciate just how much of a dog this little dog is, there is little doubt in my mind at this point that she had been homeless her entire life before being picked up, and I’m convinced that uterine infection is the only thing that slowed her down enough to be caught by Animal Control.

She is smart. She is crafty. She is fast. And she speaks with the voice of Canine Authority. Whatever it is that causes dogs to respect other dogs, she has a lot of it. I have seen Great Danes drop into submissive posture when she reprimands them for overly-friendly approaches. The baring of a single tooth is often all it takes for other dogs to back away. She is not aggressive, but she has her boundaries and insists they be acknowledged.

I call her my Warrior Princess. If she spoke English, I think she would approve.

The above photo was taken a few weeks after we brought her home, and in my mind she still looks like that fierce little creature. In truth, a thing that catches me off guard sometimes, she now looks like this. 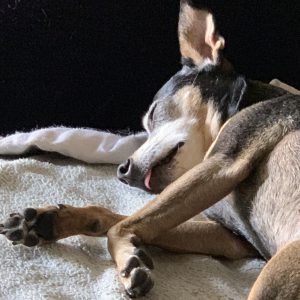 Her muzzle is almost entirely white, and there is a generous sprinkle of white fur in the black on the rest of her body. Her tongue often protrudes because she is old enough to have needed all of her lower front teeth pulled. My little girl is still little, but she is not young anymore.

Which brings us to yesterday’s time at the vet’s office.

Last week, Byng started showing signs of weakness and discomfort in her hind legs. She was hesitant to sit and jump, and rolling over caused her to yelp. We immediately dropped “roll over” from the nightly exercise/training routine, but she’s so used to doing it at the end of a particular sequence that she still did it anyway, even when we didn’t ask. So off to the vet we went.

After hearing me describe the symptoms, and doing an exam of her hips and spine, the vet said her money is on back pain but suggested we x-ray her hips just to rule out arthritis. She said it would probably take about an hour because it was a two-person job and she needed to wait until both she and a tech were free at the same time.

So I ran some errands and came back a little over an hour later. I sat in the reception area and waited.

After about 40 minutes, the vet came out and said they had been unable to do the x-ray because, even with three people on hand, they just couldn’t get Byng to calm down and hold still, and were concerned at that point that any further efforts on their part might actually exacerbate whatever was causing Byng’s discomfort in the first place. So it was agreed that I would take her home, start her on a round of anti-inflammatory pain killers, and bring her back at a time when she could be sedated. That settled, I waited for them to bring her out.

And after about 15 minutes, one of the techs poked her head out of the back room and asked me to come over. Byng had wriggled free of the vet’s grasp, managed to elude everyone who tried to grab her, and was currently in a corner of the bathroom snarling at anyone who tried to come near.

Her boundaries had been violated and she was having none of it. Thankfully, she calmed down as soon as she saw me, and I was able to get her home without any further drama.

So sometime next week, I will bring her back. There will be drama getting her in the door. There will be sedation in order to perform a very simple procedure. And hopefully at the end of it, there will be a better idea of why my girl isn’t her usual bouncy self.

Except that I already have the idea, and I don’t like it, and there’s not a damn thing I can do about it.

During the 40 minutes I sat in the reception area, I teared up at least three times that I can recall, and all for the same reason.

Our other dog had been in that same office a week earlier to be fitted for a 24-hour heart monitor. That was unsettling, but in a different way. We adopted him as a senior, and when you fall in love with a 9-year-old dog with an unknown history, a part of your mind is preparing for the worst from the minute you bring them home. The first time I looked at Gil’s ridiculously cute little face, I knew if I was very lucky, I’d probably have 5 good years with him, and after that every day would have to be considered a gift. Now he has a known heart condition, currently managed but not ever going away until it goes away for good.

But my tears yesterday came from a different place.

They came from my little girl being cornered in a bathroom, with attitude as her only weapon, when a few years ago she could have escaped that situation easily. They came from being at the vet’s office in the first place, to address something that is clearly a sign of aging. Those tears came from a white muzzle, and a missing row of teeth, and from having to lift her into the car that morning instead of watching her jump up on her own.

They came from all the signs that my fierce as fuck Warrior Princess is now an aging monarch. It will be a long time before she can be counted out, but the count has indeed begun. And as previously stated, there’s not a damn thing I can do about it. Time will continue to take its toll on her hips, her back, her teeth, the black of her coat, until only one remnant of her youth remains.

She will leave this world fierce as fuck, with her boundaries respected.