On March 16, 2020, six Bay Area counties received word that, beginning at midnight, a shelter-in-place directive would be in effect to reduce the spread of COVID-19.

I’m a hermit whose full-time job is Homemaker & Dog Mom, so frankly this wasn’t a huge adjustment in my life. Hubs routinely works from home once a week anyway, so we have that drill down as well. I buy groceries in bulk to save money and reduce the number of times I have to leave the house ever, so that base was covered. And after over 12 years together, we’re really good at ignoring each other when we’re both home but want to be doing different things.

In short, we are uniquely well-qualified for this particular endeavor.

However, there was one thing that came back to bite us, and that thing was letting life pile up and neglecting to get haircuts in February.

For me this wasn’t terrible since I wear my hair pulled back most of the time anyway. For Hubs, who is making the best of his new “WFH All The Time For Lots Of Ever” life and using what would normally be his lunch hour to hop on the elliptical trainer (another huge shelter-in-place advantage born of me never wanting to go outside; a good piece of gym-quality exercise equipment in the house), thick shaggy longish hair very quickly became a hot sweaty pain in the ass.

So when we realized we wouldn’t be able to see our beloved Mindy the Hair Guru anytime soon, I said “Hey! I can cut your hair!”

The linguistics enthusiasts among you are welcome to bookmark this post to use as a perfect example of the difference between “can” and “should”.

Hubs’ preferred cut is pretty standard, very short on the sides and back, and slightly longer on top. I felt like maybe I could absolutely sort of do this. Worst case, I told him, he would get the “Very Short All Over & In Two Weeks It Will Be Fine” Special.

To which he replied “you’re the only one who has to look at me for the next two weeks anyway” and off we went. 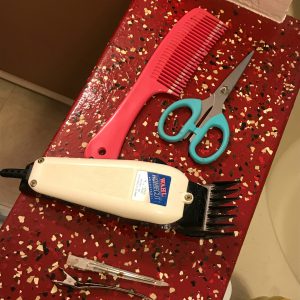 We have actual hair clippers made for operations such as this, but we only have one guide. It’s a #3 which, if you’re not familiar with such things, cuts to 3/8″. So that covered the “very short on the sides and back” part. For the “slightly longer on top” part I would need scissors. I decided the thread scissors would be the best tool for the job since of all the things I have scissors specifically for thread is the closest to hair and funny story it turns out that is a horrifically false equivalency and I might have been better off using the electric carving knife because that is at least semi-designed to gradually shave bits of a thing off a larger mass of thing.

I started by doing what I always see Mindy do, pinning up the part of the hair that is going to stay longer, so I could do the short parts first then fade into the longer parts. I took a deep breath, remembered that we’d both already agreed to be okay with a potential worst case scenario, and made the first swipe. 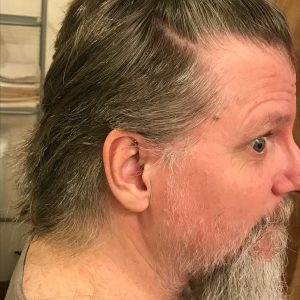 “Okay”, I said to myself. “That isn’t terrible. I can definitely maybe absolutely sort of do this.”

Turns out those clippers vibrate a lot and I had to take breaks just to get the feeling in my hand back. I was also very tempted to stop here because seriously so hawt. 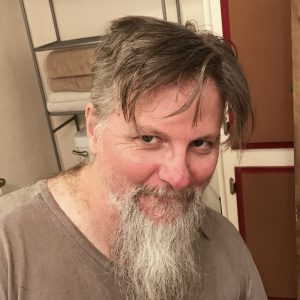 Then one of Hubs’ coworkers stopped by to see why he’d been away from his desk for so long. 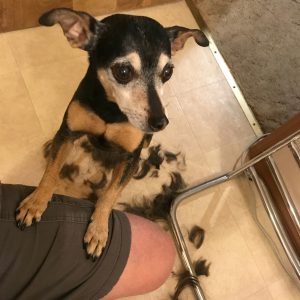 I felt like I was kind of doing pretty okay. Then I didn’t. Then I did again. Then I combed his hair a lot because maybe the unevenly-cut parts just weren’t laying right because I’m pretty sure that’s a hair thing. Also did you know there’s a reason people go to school to learn how to do this?

Eventually I found “good enough” before my husband ended up bald and not liking me anymore that day. But the primary objective, him not having all of this 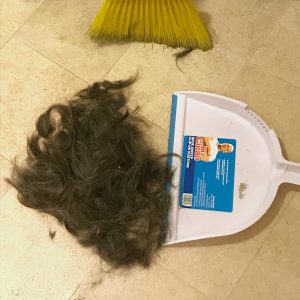 attached to his head while trying to work out, was achieved.

And I can say with complete confidence that this is categorically not the absolute worst haircut anyone has ever gotten.

I will be bringing Mindy a lot of cookies when next I’m able to see her.