Because why wouldn’t there be free alcohol?

The other day when my mom came to pick me up for our weekly Costco excursion, she said “your father got this when he bought some stuff for his drill, he thought you might be able to use it” as she reached into her purse. In the 4 seconds between those words leaving her mouth and the reveal of what “this” was, I had ample time to wonder a) what might be included with power tool accessories that I would use more than my dad would, and b) what possible power tool thing would fit in my mom’s purse.

Turns out “this” was this 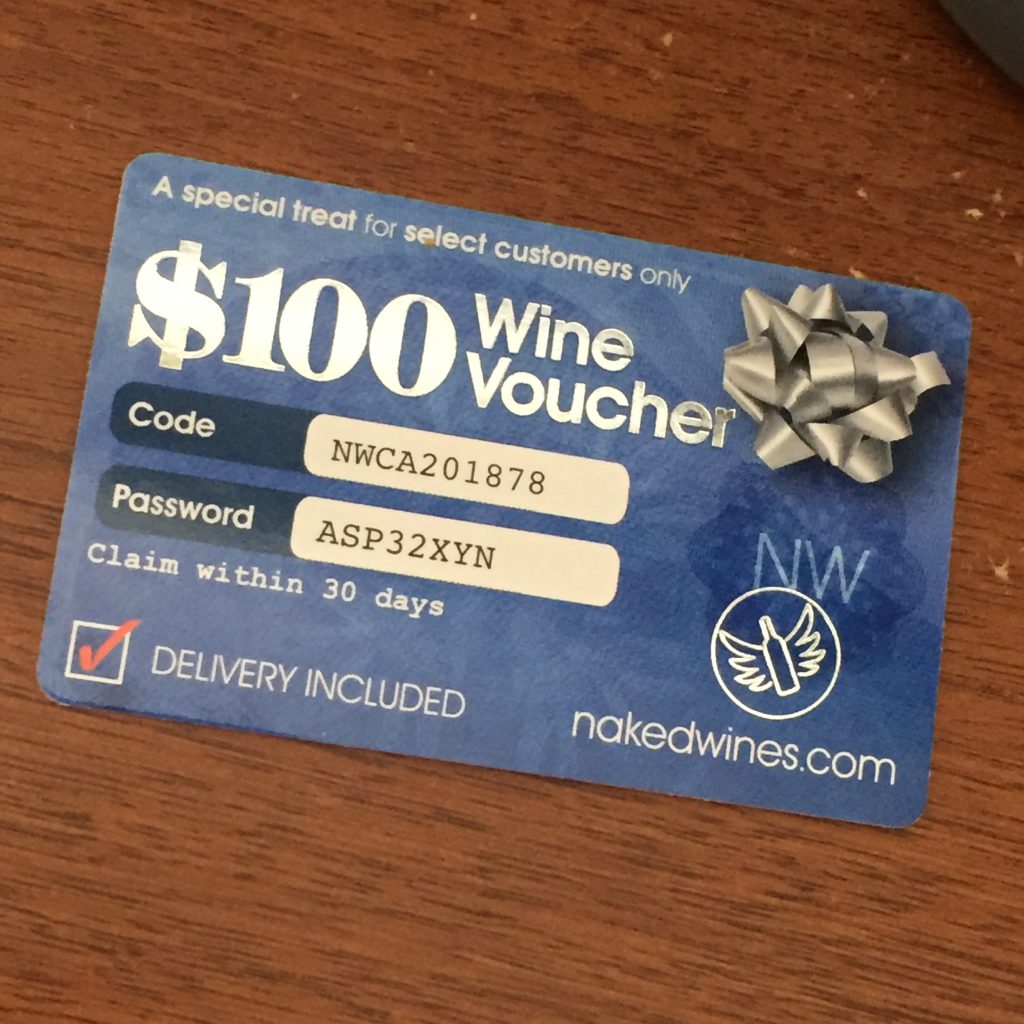 and to “this” I could only respond “because why wouldn’t they give you free alcohol with your power tool purchases?”

A few days later, I took a look at the Naked Wines website because, questionable conveyance method aside, $100 in free wine is still an intriguing prospect. I knew full well I would have to buy more than $100 in product to redeem the voucher, but looking is free and frequently worth doing.

It then took me about 3 minutes to decide I was not only going to redeem this voucher, but also sign myself up for the opportunity to give this company even more of my money.

Naked Wines isn’t just selling finished product. They’re financing the product from beginning to end, through an ongoing crowdfunding platform. It’s essentially Patreon for booze. Customers they call Angels pledge to deposit $40 a month into their personal Wine Piggy Banks. Those funds are used to support independent winemakers around the world, many of whom used to work for large well-known wineries before deciding to pursue their dreams and strike out on their own. With funds available right when they’re needed, these indies are able to acquire the resources and, even more important when it comes to wine, take the time they need to produce the best bottles possible. In return, Angels get first pick of everything, at a substantial discount, with the money in their Piggy Banks going toward their purchases.

All of that on its own would have been more than enough to earn my support of this endeavor. But there is another reason I jumped on the Naked Wine train as soon as I became aware of its existence.

I am a native Californian, lived here all my life. I will be the first to admit my state is far from perfect, but a lot of things about it are pretty magical, and one of those magical things is our wine country and its many many offerings. Sadly, the CA wine industry was hit hard by the 2017 fires, and is still working to rebuild. Most of the big labels are all right, but a lot of the little guys are hurting. If my $40 a month can contribute to rebuilding something that is not only beautiful and magical and creative but also a vital part of my state’s economy, you’re damn right you can have my $40 a month.

So I redeemed my $100 voucher and ordered my Angelic Customer Favorites mixed case. After my voucher and my Ebates cash back, it cost me $74.89, just over $6 a bottle. That order put my name on the waiting list to become a Naked Wines Angel. That’s right, there’s a waiting list. Naked Wines wants to be sure they have enough perks to go around, so they don’t take anyone’s money until they’re sure they can keep the promises they’ve made. When I first signed up, there were 12570 people ahead of me. Today, I got an email saying there are 10732 people ahead of me, and 1615 people already behind me. I am now pissed off at 10732 people I’ve never met, and mentally telling 1615 other people I’ve never met to suck it because I got here first.

All because somebody said “Hey, you know who would probably want a bunch of free wine? People with power tools.”